Making Her Own Waves 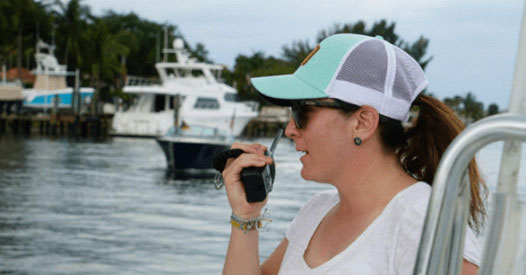 Making Her Own Waves: Erin Badcock,
COO of The Hacker Boat Company 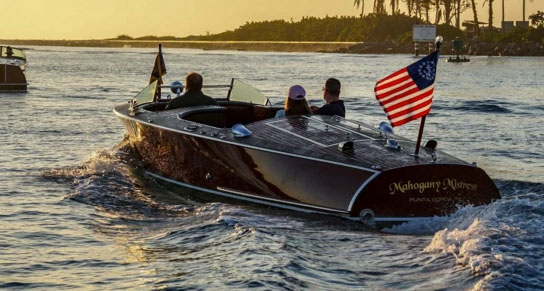 Erin looks over the day-to-day operations of a unique company; one located in Silver Bay, New York, mere fingertips away from Lake George.

The company’s daily business puts mahogany in the hands of a select few extra-sharp craftsmen. These craftsmen, however, don’t build cabinets or footstools.

Hacker Boat Company was founded in 1908 by the young John L. Hacker, a brilliant naval architect.

Hacker didn’t like to waste time. He earned his marine design accreditation in 1877, and afterwards, he quickly went to work at pushing water travel forward.

Thanks to his dedication, Hacker’s boats were lightning-quick on the seas. In fact, one of them, called Kitty Hawk II, was so fast, that no other boat at the time could surpass it; it was the first in North America to reach 50 miles per hour. This was thanks to its brilliant design, which included an element that would be found in an overwhelming majority of boats soon after: the V-shaped hull.

Hacker captained his company to extraordinary heights, and while the company’s monumental V-shaped hull has gone unmatched in terms of worldwide impact, its standard for craftsmanship has persisted through generations, enduring numerous recessions and a depression and two world wars.

The Hacker Boat Company operates in upstate New York, where its thirty employees build and repair elegant mahogany speedboats. They produce around ten to fifteen new boats a year. And no two boats are alike—each is built to-order, tailored to its customer’s interests. Hacker prides itself on producing the best of the best.

Rebellion had the privilege of interviewing Erin, who came in towards the company’s recent history.

Erin became joined the company around 2010, when Erin’s father invited her to look into the company’s operations. The more time Erin spent around the company’s docks and workshops, the more she learned about the organization. Erin moved up, eventually becoming Vice President and Chief Operating Officer of Hacker Boat Co., the position she holds today.

When asked about the benefits of running a localized business, Erin described that the company’s workers and customers are able to develop a unique level of closeness.

Hacker’s customers hold, and have held, ties to the company for a while, meaning they’ve met the same few representatives and repairmen that they’ve met time and time before. They’ve gotten to know each other; they’ve shared their boating stories, and have been able to express exactly what they love about the Hacker brand, and why they stand by it.

Coworkers as well have the chance to develop ties between each other. As Mrs. Badcock put it, “Everybody knows everybody’s name; everybody’s worked together on some sort of project.” Hacker has developed a tremendous sense of loyalty among both its customers and employees, including former employees.
When asked about the benefits of running a localized business, Erin described that the company’s workers and customers are able to develop a unique level of closeness.

Hacker’s customers hold, and have held, ties to the company for a while, meaning they’ve met the same few representatives and repairmen that they’ve met time and time before. They’ve gotten to know each other; they’ve shared their boating stories, and have been able to express exactly what they love about the Hacker brand, and why they stand by it.

According to Erin, every employee is a team player. They’re each at Hacker Boat Co. because they care about their craft. They carpenter the boats by hand, requiring them to have fine attention to detail which, in such a specialized industry, is not a given. A keen eye is never gifted; it’s developed, and learned.

This attention-to-detail is a trait that Erin prioritized.

When Erin first joined the company, she strove to make sure that, at every point in the production process, eyes were keen and the output was stellar. She saw to it that every worker was building at the right standard and training others the right techniques.

This quality of output certainly hasn’t hurt the company’s recent expansion: Erin was proud to say that two prestigious brands, Tommy Bahama and Neiman Marcus, worked with them. They gave Hacker Boat Co. specifications for constructing boats, and the company matched expectations successfully, in form with its previous projects. This opportunity, along with endeavors to expand operations further (Erin commented that Hacker Boat Co. has even set up base in Thailand), has only been made possible thanks to the high standards that the company—as per Erin—sets for its products.

Erin very much enjoys her job; and it doesn’t hurt that she herself is an avid boater.

Erin has fond memories of being on the water with her family. She often went boating with her dad, and today the smell of varnish and gasoline from her company’s docks will bring her back to her youth, with some reflections back to when she was four years old, even.

Erin is able to live out that nostalgia through her career. The company is located by the very same lake she visited as a child, and she takes advantage of the opportunity when she can, boating with her son.

Erin was asked about her favorite boating location, and even through all her travel to different parts of the world—including Thailand—and interactions with customers who tend towards all sorts of waters, without hesitation she replied, “Lake George is second to none.” 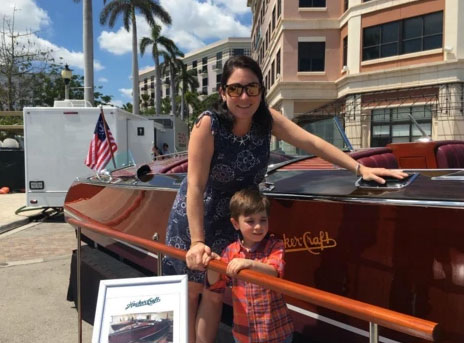 Mrs. Badcock & her son in front of a Hacker Craft boat